"The availability of the experience of SIGTTO members has helped class develop its rules and guidelines in an appropriate manner while the preparation of the Society’s best practice guidance publications has similarly gained advantage from the in-depth experience of class." 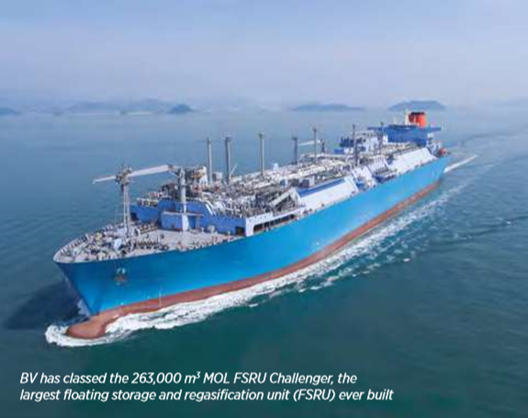 Liquefied gas has been a focus for BV from the very beginning of the transport of such cargoes by sea and we have never stopped investing time and effort in the sector. We can look back with some pride on an industry where safety always came first and the sector’s track record in safety speaks for itself.

BV was often first in classification terms in the seaborne carriage and marine storage of LNG. This was partly based on the initial leadership of France in LNG ship construction and in the design of LNG containment systems. It is true to say that the leadership in the construction of LNGCs has shifted over the years, from France first to the US, followed by Japan and, now, Korea while China is currently building a growing presence in the sector. Throughout this movement of the LNGC construction axis, BV has remained to the fore wherever the ships are built.

BV continues to refine and upgrade its rule regime across a number of other fronts to keep pace with evolving technologies. For example, our class society recently issued its first set of dedicated FSRU and floating storage unit (FSU) rules the need to cater for the different technical and regulatory options opening up today for operators in the floating gas terminal sector.

Options considered by the rules encompass conversions versus newbuild facilities, nearshore and offshore locations, ship and barge configurations and the conditions where the choice of a storageonly unit works best. The new rules have helped keep BV prepared and ready to handle a full range of enquiries as the demand for floating gas terminals grows.

From the perspective of BV as a class society, SIGTTO has played a major role in establishing and reinforcing industry best practices for the liquefied gas sector over the past four decades. The Society’s openness, high level of technical understanding and goodwill of the membership have been instrumental to its success.

An important step was taken in 2004 when SIGTTO membership eligibility was opened to class societies. The step proved to be mutually beneficial by creating a new two-way dialogue. The availability of the experience of SIGTTO members has helped class develop its rules and guidelines in an appropriate manner while the preparation of the Society’s best practice guidance publications has similarly gained advantage from the in-depth experience of class.

The close relationship between SIGTTO and class societies proved particularly useful in 2008 when IMO sanctioned a SIGTTO-led industry initiative to undertake a major revision of the International Gas Carrier (IGC) Code. IMO’s adoption of the updated Code, after several years of intense activity by a range of working groups, was the rewarding outcome of this industry-wide cooperative effort.